Visiting for the First Time?

To listen. To hear. To convey.
The Human Experience.
To feel one’s emotional state
And share it with another.
This is what we are all about.

Our project started as a means of sharing deep
emotional stories of the lives of American Muslims.

If you listen to any of our productions, and are moved
to tears, feel angry, sad, extremely happy or overjoyed.

Then we did this right. 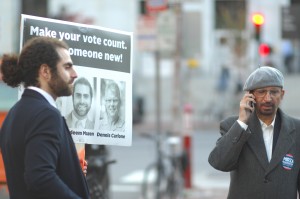 Vying for the same office: Muslim candidates for City Council

Cambridge, MA was hot recently in a historic election where incumbents and new candidates competed for one of the seats on city council in Cambridge.  But among them was a young Muslim named Nadeem Mazen. In this audio documentary, the journey follows Nadeem as first time ever candidate competing for one of these offices, and competing, as well, against another Muslim too.

Between War and Controversy

Rima Fakih is most known for winning Miss USA in 2010 as the first Arab and first Muslim to do so. But most people know that surrounding that was a great deal of controversy regarding a Muslim woman in a … more

A Pioneer in Hollywood: Being Muslim and not playing the terrorist

This is a life story about how Faran Tahir, a well known Hollywood actor from Iron Man, Star Trek, Jinn and other notable films was inspired to become a Hollywood actor, and shatter stereotypes in the process.  The story takes … more

Ira Friedlander, a notable author and photographer was a young boy growing up in New York in the mid 1900’s. At the age of 9, he read a poem that struck at this heart. He would spend the rest of … more

This personal narrative involves one of the biggest news stories of 2013, related to the Boston Marathon bombing. The wife of Ibrahim Todashev, the man fatally and mysteriously shot and killed by the FBI, shares her own life story in … more

Listen to this rare story of how one man immigrated to America at 12 and turned one trip to the grocery store into a $400 million dollar, and growing, business.  The story shares an interesting insight into the immigrant experience … more

This is a story about two brothers who spent every moment together since childhood, never attending school or work. Several stressful circumstances in their lives, including experiencing a war, may have developed difficult mental conditions that their family had to learn … more

Immediately after the bombings on marathon monday in Boston, media reported that a Saudi man was being being questioned by authorities. Some stated him as a suspect, others as just a person of interest. 24 hours later, the media stated … more

A 16-year-old Muslim girl inspires her neighbor, Helene Newberg, to run in this year’s marathon. And like every marathoner who ran and was interrupted by the horrific bombings, Helene will never forget what happened. Hear the touching story about how this marathoner … more

The ghost that came between them

Who would think that a White American girl raised in the South as a door to door Jesus proselytizer would find love in the strangest of places, and become the “good Muslim housewife”. Except this love story had a strange … more

The Olympian Who Could Have Been

Said Ahmed was a successful, record breaking track athlete, who competed in the 2008 Beijing Olympics as part of team USA in the 1500 meter race.   But, too much happened before his run in the Beijing Olympics then an interesting … more

Listen to the story of Jack, an 80-something-year-old-man who served as a train conductor in India and Pakistan during the years of partition in the 1940s. Jack’s life would quickly unravel after those years. But when he was trying to … more